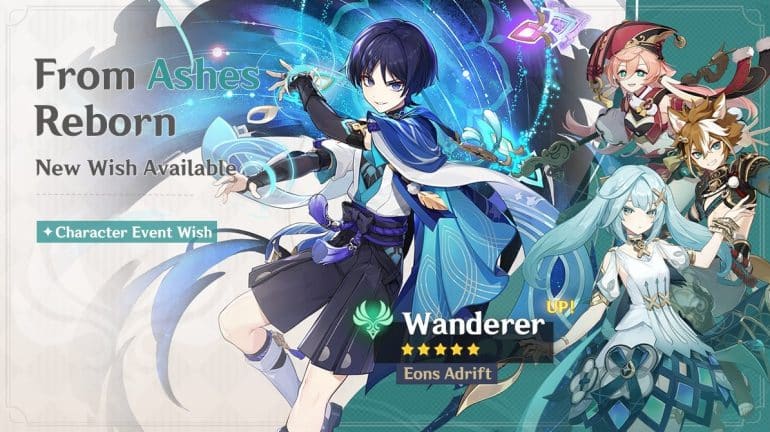 New updates in Genshin Impact often lead to unexpected surprises for all gamers. On their main website, Mihoyo has announced that new characters will be joining the roster of Genshin Impact and they will become a necessity in players’ future adventures. Read on, and this guide will cover all Genshin Impact 3.3 New Characters from their strengths, weaknesses, and more.

In the new update for Genshin Impact, there are two new characters joining the game and they will be helpful and challenging to use once players get to know them.

Wanderer is a 5-star rare character that uses the Anemo element. He is a mage that uses a Catalyst-type weapon and conjures skills that allow him to float mid-air, making it easy to avoid grounded melee attacks. He also has a wide variety of AOE attacks and creates an infinite amount of strong Charged attacks as he flies.

Though Wanderer is an excellent AOE-type character, he has low DMG, HP, and Def. Having at least one healer or shielder in any team is recommended to balance its weaknesses.

Below is the complete list of materials needed to ascend Wanderer’s level to its max :

Faruzan is another 5-star character with an Anemo element and is a great support-type Archer. She increases the strength and critical damage of Anemo-type attacks and decreases an enemy’s Anemo Resistance. She can also do crowd control with her Elemental skills and charged attacks.

Even though she has excellent support skills, her use of skills comes at a high cost and her elemental Skill generates few elemental particles. It is recommended that weapons and artifacts like Elegy of the End and Viridescent Venerer be equipped for her for it will help recharge her energy quickly by 200%.

Below is the complete list of materials needed to ascend Faruzan’s level to its max :

Get to know more about the 2 new characters of Genshin Impact in the official live stream of theirs in their Youtube page.