Destroy All Humans 2 Reprobed All Cult of Arkvoodle Missions 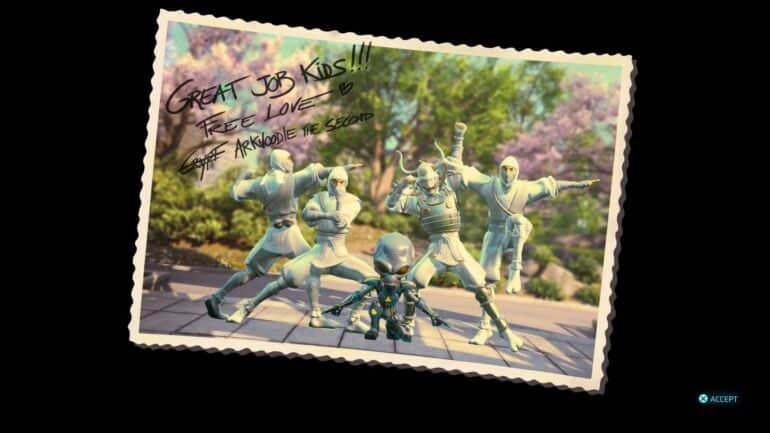 The Cult of Arkvoodle in Destroy All Humans 2 serves one purpose: to spread the word of Arkvoodle and promote his “son”: Crypto. What they don’t tell you is that its true purpose is to look for an alien superweapon lost through the ages. Guess that should have been part of the recruitment strategy.

This guide will go through all the Cult of Arkvoodle missions in the game albeit with a loose description of that mission’s overall objectives. What’s important is that you’ll know what the side objectives you need to accomplish in order to get more Furotech cells and the missions you’ll need to clear in order to unlock the Burrow Beast weapon.

Get the Flyppies to accept Arkvoodle by body-snatching their leader, Rainbow.

Rescue Shama Llama from the police.

Defend the fledgling cult. Prevent the police from destroying all of the tents. Only one needs to survive in order to rebuild.

Advertise the Cult of Arkvoodle using your flying saucer.

Go around Hashbury and help the Freak get out of his slump by delivering “art supplies” to him.

All Albion Cult of Arkvoodle Missions

Convert the Stoned Poseurs to Arkvoodle by doing them favors.

Convert the Mod Mob to Arkvoodle by convincing them that Arkvoodle is the next trend in music.

Find the mole and kill them.

Keep the public from finding out the truth about the Furon invasion.

Go back to Bay City and get Freak to help you out.

Continued after the “Freakin’ Art” side quest.

Go around the city and use the Propagator to distribute flyers.

Cult of Arkvoodle – Half-Wits Are Better Than None

Gather the white ninja leaders together and focus their energies solely on the cause.

Convince the Black Ninja to abandon their dark idol so they can worship the great Arkvoodle instead.

Defend the cult’s tents as best you can against the onslaught of the angry peoples of Takoshima. Need one tent need only survive in order to rebuild.

Prepare the ritual to finally get the Burrow Beast weapon. Prevent the KGB from interfering with the ritual.