Stray Scratching Locations – How to unlock the Territory Trophy

This guide shows you some potential scratch spots per chapter 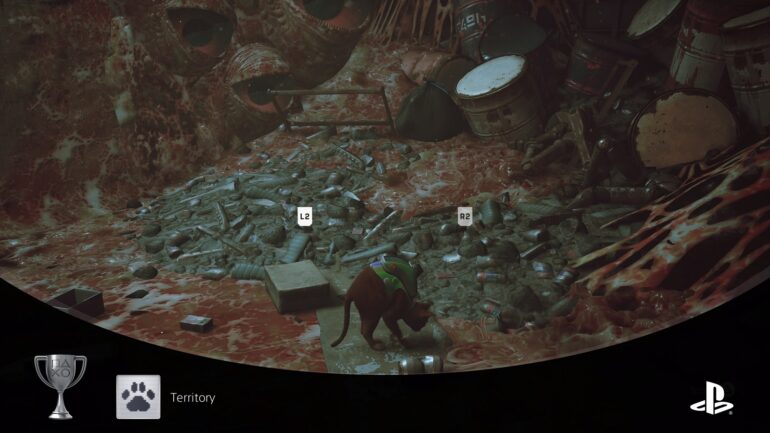 Do keep in mind that some chapters only have 1 spot where you can scratch and that also goes for chapters where scratching is tied to progression. The remaining chapters are in living areas, so finding a scratch spot shouldn’t be a problem.

What Does Scratching Do in Stray?

To progress in Stray, players must solve puzzles and things and objects can be interacted with by pressing Y on your keyboard or the triangle button on your controller. When you get close enough, a button prompt will appear to tell you that the cat and the droid B-12 can interact with it.

Occasionally, when you press this button, the cat would pose with both of its paws stretched out, prompting you to press the left and right trigger buttons on your screen. To get the cat to start scratching whatever you’ve just touched, hit both bumpers quickly and alternately.

Chapter 01 – Inside the Wall scratching location

The first ever scratch spot can be found on a tree during the cats’ walk around the wall. One of the cats will start scratching the tree, almost inviting you to do the same. This one is hard to miss unless you’re really in a hurry.

The second chapter only has a single scratch spot, which is fair considering that you spend half the chapter being chased by Zurks and another half being guided to a specific place. You can get to this spot after dropping the paint can through the skylight.

As the name suggests, the majority of this chapter takes place within the confines of a flat. The scratch spot is the carpet between the computer and the mainframe room.

The Slums is full of places to scratch. You need only to find one for it to count so you don’t need to go overboard trying to find every single spot. Believe me, there’s a handful of them scattered throughout the map. But even if you aren’t actively looking for scratch spots, there are a couple of curtains that you need to scratch in order to progress. There’s no escaping it.

The Rooftops chapter only has a single scratch spot, and it’s at the very beginning of the level. On the first rooftop after getting off the bucket ride. Feel free to look for other places to leave your mark, but chances are, the Zurks won’t exactly give you much a chance.

We don’t exactly know if you pass up on another chance to scratch since you’ve already scratched things up in the Slums, but since the trophy asks the player to perform the act at least once per chapter, we didn’t want to take our chances. So, go ahead and look for the nearest couch, or better yet, the booths on the second floor of the bar.

As far as we know, there’s only one scratch spot in the Dead End chapter, and it happens to be in Doc’s safe house. It’s in the same room as the Defluxor so it’s easy to find. And you’re done getting that fuse back in place at least you’ll be able to fight back against those annoying pests. At least for a while.

Now, this one is one of the most missable scratch spots in the game. You can get to it after hacking both sides of the flood gates. Since this spot happens to be sandwiched between two chase sequences, you might want to cut yourself a little slack for believing that there might be no safe places in the Sewers Chapter.

There are a couple of scratch spots within Antvillage. The more convenient one can be found in the bunk bed area after first crossing the bridge and B-12 finally finding out what it truly is.

Midtown is another large explorable hub with lots of places to scratch up. The first one can be found outside Midtown, behind the closed-off elevator. You’ll be in the company of the moody Bonobot as he contempts everything him.

You don’t need to look for a scratch spot in the Jail chapter. The place is practically abandoned if not for the constant threat of the Sentinels. Any bot sent here might as well lose hope. But not us, we have a mission, and part of it involves stealing a 3-wheeler mini truck. This is the only scratch spot on the level and you barely get to scratch the paint off the truck.

The final chapter doesn’t have any leisurely scratch spots. Instead, there are 4 instances where your cat claws are needed to mess up the system and allow our drone friend to hack through. It’s no biggie, and for the final stretch, it’s good that we’re allowed to do cat things up until the end.

How to unlock the Territory Trophy in Stray

The player must scratch in every chapter in Stray on the locations listed above to unlock the Territory Trophy. Like we said before, this isn’t the most mechanically intensive guide, it’s just really easy to look over some of these places. And sometimes, you might want to cover all your bases and strike out places you know that scratching is unavoidable.