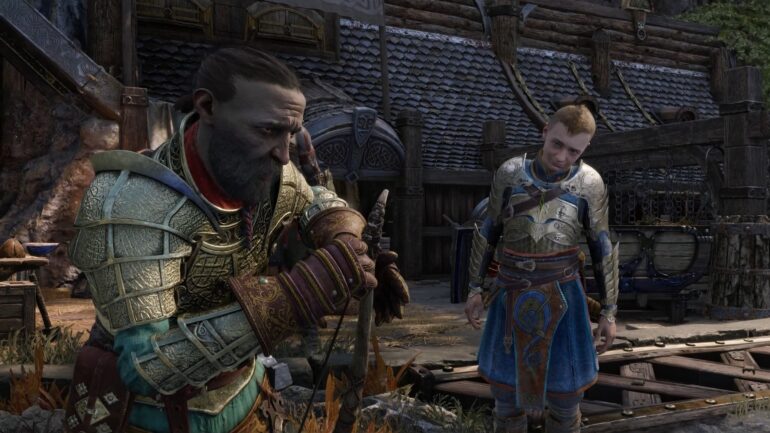 Nidavellir Collectibles are scattered throughout the map of God of War: Ragnarok. These collectibles have varying degrees of lore crossover with the realm Kratos and his son will explore, and provide useful advantages in battle and exploration.

As such, this guide will list down exactly how and where to find all the collectibles in Nidavellir, so read on.

Nidavellir is a region found in the Svartalfheim of God of War Ragnarok. There are a total of 9 collectibles found in this region, which are as follows:

Park the boat near the town and there is a green blockade on the left side of the docks. Shoot it with Atreus’ Sonic arrow and the artifact will reveal itself.

Near the smithing shop, there is a golden scroll on the ground in the middle of the market square.

From the market square, there is a raven sitting on top of a house on the left side of the smithing shop.

Crawl through the tunnel past the smithing shop to enter another area. After you exit the tunnel, turn left and destroy the barrels, then head into another tunnel where the artifact is found.

After getting the artifact, exit the tunnel by climbing up and straight ahead, there is a wind coming out of the wooden pillar. Use the spear at the pillar by throwing it and the chest will be found on top as soon as you climb it.

This lore is found right next to the legendary chest which is glowing green on the floor.

After opening the chest and getting the lore, walk downhill till you see a broken bridge. There is gas coming out of a wooden chimney and players must throw their spears that will create a path to jump over. On the other side is a flower which will trigger one of the Favors known as Nine Realms in Bloom.

This Favor can be unlocked after completing the events of Chapter 10: Forging Destiny. After getting your spear from the Forge, you’ll eventually make your way down back to Nidavellir Beach. As soon as you reach the beach, head past the broken bridge where a mystic gateway is located. Standing next to the gateway is Durlin, interact with him to trigger this Favor.

After accepting the Favor from Durlin, turn around and cross the broken bridge again to find a glowing gravestone in the middle of the area.

Watch this video created by FoggyProductions to know All Nidavellir Collectibles locations in God Of War Ragnarok: