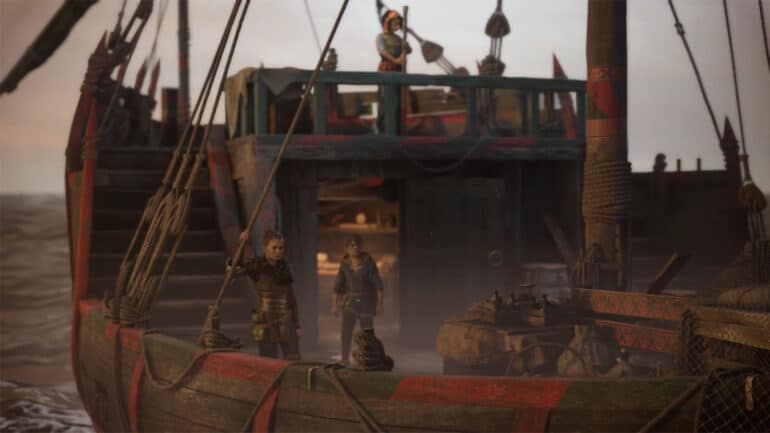 Healing Our Wounds is the fourteenth chapter in A Plague Tale: Requiem following the escape from La Cuna. The de Rune siblings, together with Lucas, Arnaud, and Sophia board on the Rascasse to head to a different place and get away from all the madness that they have gone through.

In this guide, we will go through the walkthrough of chapter 14: Healing Our Wounds, of A Plague Tale Requiem, showing some tips, tricks, or solutions on how to complete the chapter.

A Plague Tale Requiem Chapter 14: Healing Our Wounds finds the protagonists aboard Sophia’s boat as they fled from the disaster in La Cuna.

Talk to the others

Go around the ship and talk to Hugo, Lucas, and Sophia. Arnaud is passed out at this point.

Hugo will call your attention and wants to know if Arnaud is fine. He then talks to Arnaud.

Sophia will then call out about the ship that’s chasing up. It’s the Count’s ship on tail as he tries to capture Hugo.

Get away from the Count’s boat

Head up the upper deck to help Arnaud with the sails. After setting it, go to the lower deck and do the same. You’ll need to throw some cargo off the boat to gain speed. As you do, the ship gets hit with flame arrows. Sophia calls you to go to the upper deck to defend against the archers.

Use your sling to hit the archers from the other ship. After hitting several archers, the upper deck will be hit with another flame arrow. You can continue hitting more archers, but the boat will be rammed, causing Sophia and Lucas to go overboard.

Arnaud then wakes up Amicia and he decides to fight off the boarding soldiers.

As soldiers come to the boat, you can help out by staggering them with the slighshot or exstinguis. You also need to eliminate the archers that will appear on the other ship from time to time. More and more soldiers will come to the ship after a while and a cutscene will show Hugo calling out to his sister. Amicia will get distracted by this and gets shot.

The Count then comes over to the ship. Hugo tries to call the rats, but is unable to since they are in the middle of the ocean. He tries to tackle the Count, but he gets knocked out. After a dialogue between Arnaud and the Count, the Count leaves with Hugo while archers continue their attacks. Arnaud decides to escape with Amicia by throwing her over the ship and jumping into the ocean as well.

Chapter 14 – Healing Our Wounds Trophies in A Plague Tale Requiem

Here are the trophies that can be obtained in Chapter 14:

Check out this video by Happy showing gameplay for Chapter 14: