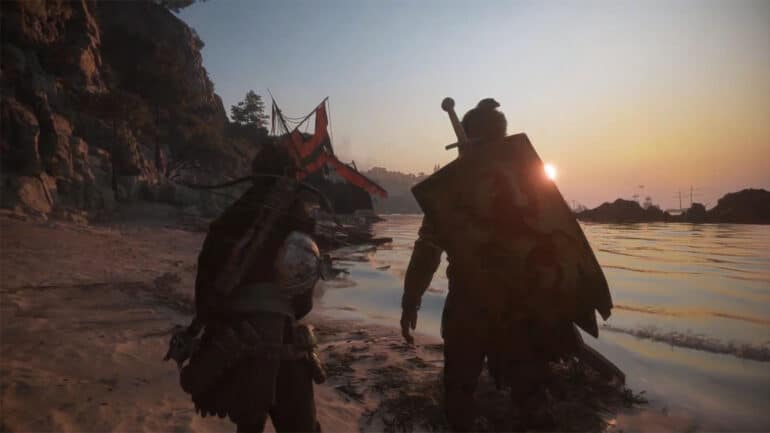 Dying Sun is the fifteenth chapter in A Plague Tale: Requiem following the attack of the Count at sea to seize Hugo. Despite being mortally wounded, Amicia manages to survive with the help of Arnaud. Amicia becomes hellbent in finding Hugo to prevent him from dooming everyone with the Macula.

In this guide, we will go through the walkthrough of chapter 15: Dying Sun, of A Plague Tale Requiem, showing some tips, tricks, or solutions on how to complete the chapter.

A Plague Tale Requiem Chapter 15: Dying Sun starts off with Arnaud managing to revive and dress Amicia’s wound with the help of Lucas who survived being thrown overbord.

Regroup with Lucas and Sophia

After giving the news that both Lucas and Sophia survived, Amicia takes to her feet and the two make their way back to the shipwreck to continue the mission to recover Hugo.

As the two make their way to the now wrecked Rascasse, the Count shows up after following the boat to make sure that no one will come after him for Hugo. Arnaud takes up arms to force the Count to tell them the location of where Hugo is kept.

A fight ensues as Arnaud takes on the Count head on. The other soldiers will then come after you as Amicia, so be prepared with your arsenal.

After the wave where the first armored soldier appears, a cutscene will show an explosion in the distance within the city of Marseille, giving out the location of Hugo and signaling that the Macula is getting to him. Clouds of the Nebula cover the entire sky, making it harder to see the surroundings.

The fight will continue with the tougher soldiers joining in. Continue focusing on the ranged spearmen and bombardiers that appear, then work on disarming the shields and removing the armors of the armored soldiers before finishing them.

Eventually, a cutscene will show Arnaud getting stabbed by the Count, but Arnaud uses this as an opportunity to remove the Count’s helmet, leaving his opponent’s head exposed for Amicia.

At this point, use your slingshot to deal a headshot towards the Count to finally kill him.

As the fight ends, Amicia tries to help out Arnaud, but he passes away after saying his final words. Amicia then unties Lucas and Sophia and they make their way to the walled city of Marseille.

The three make their way to Marseille, passing through panicking villagers that have been shook by the explosion.

The carriage comes to a stop at the boarded gates of the city, so Amicia tries to use the flame turret on their carriage to find another way through. Aim the turret at the wooden fence on the right to proceed.

As the city walls begin to throb because of the rats, a part of it breaks, releasing a mountain of rats that immediately chase the carriage. Use the turret again and shoot flames towards the advancing rats to slow them down. Eventually, they will stop following, but only to reappear again by busting another side of the wall, causing debris to collapse on the carriage.

The chapter ends showing the three surviving the crash, and they decide to take the journey to the city on foot.

Here are the trophies that can be obtained in Chapter 15:

Check out this video by TheTouryst showing how to defeat the soldiers in the fight of Chapter 15: