A guide on how to complete the Lullaby Island quest and get the Forest Minuet in Lost Ark. 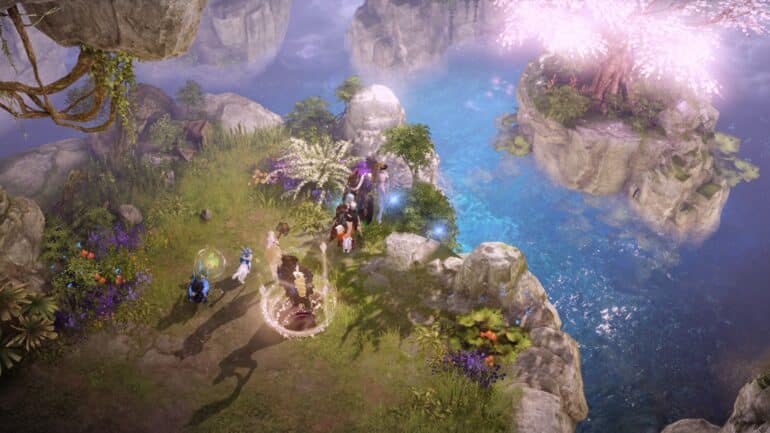 Lullaby Island is one of the several islands that players can visit in the seas of Lost Ark. Similar to the other islands, Lullaby Island has its own quest chain that requires players to play a song during certain times of the day and visit a secret spot where a co-op quest has to be completed.

In this guide, we will look into the Lullaby Island quest chain and talk about the important things on how to complete it, as well as find out how to get the Forest Minuet song from this quest.

How to Get to Lullaby Island in Lost Ark

Lullaby Island can be found southeast of Tortoyk Island. You can ride the ferry to Tortoyk island and then make your way to Lullaby Island on your ship.

How to Complete the Lullaby Island Quest

Upon arriving at Lullaby Island, talk to Traveler Eclipse to accept the first quest. You will then have to search for three hidden fairies within the island. All three fairies can be found near the center of the island. Talk to one of them and then pick these responses in this order:

Doing this will complete the quest and will then open up the second quest called I Can Hear You.

Accept the I Can Hear You Quest

Look for the next fairy and talk to it. Then, follow these responses in this order:

Doing this will complete the quest and will open up the third quest called It’s Okay, Miss Fairy.

Look for the third fairy and talk to it. Then, follow these responses in this order:

After completing this dialogue, you will then be asked to go to the spot marked on the map. You will then see wall of thick vines covering a path behind it.

Play the Song of Resonance to open the Secret Path

You will then have to play the Song of Resonance during specific times of the day. This will be announced in the events tab on which you can set an alarm for it. In general, the event goes up every past 20 minutes of an even hour of the day.

Once you play the Song of Resonance, the vines will recede and will then reveal the hidden path. You may have to wait for around 3 minutes after playing the song before the path opens up. Also, it only requires one person to play the song to open the path.

Play the Song of Resonance in the Hidden Area

Following the path will lead you to the hidden area in the island. Head towards the end of the path where you will see a leafless tree. After a few seconds, the Magick Melody co-op quest will then appear for everyone in the hidden area. You will then have to play the Song of Resonance along with the other players until the quest gauge reaches 100%. Make sure to contribute as this quest has a time limit.

Once the Magick Melody quest is done, you will then receive a chest that usually contains one Voice of the Forest from the blossomed tree. You will then have to do this co-op quest two more times by waiting for the next secret path opening on the next even hours. You can leave the island and do other quests while waiting.

Give the Voices of the Forest to the Fairy

Go back to the fairy and hand over the three Voices of the Forest to complete the It’s Okay, Miss Fairy quest. You will then be rewarded with the Forest Minuet, another song that will be useful for other quests.

Where to Use the Forest Minuet?

The first quest that requires the Forest Minuet is with one of Una’s Tasks called the Whispering Minuet daily task where you will have to play the song to the animals living in Whispering Islet.

The second location where the song is needed is at the Lakebar Zone, where you will have to clear out thick vines to access an area where you can find two Mokoko seeds.

How to Get the Lullaby Island Soul

The Lullaby Island Soul has a chance to appear as one of the rewards inside the chest that you get from the Magick Melody co-op quest. Even when you have completed the Lullaby Island quest chain, you can still participate in the co-op quest to acquire the island soul.

Check out this video by Klaster Gaming showing how to complete the Lullaby Island quest and get the Forest Minuet: