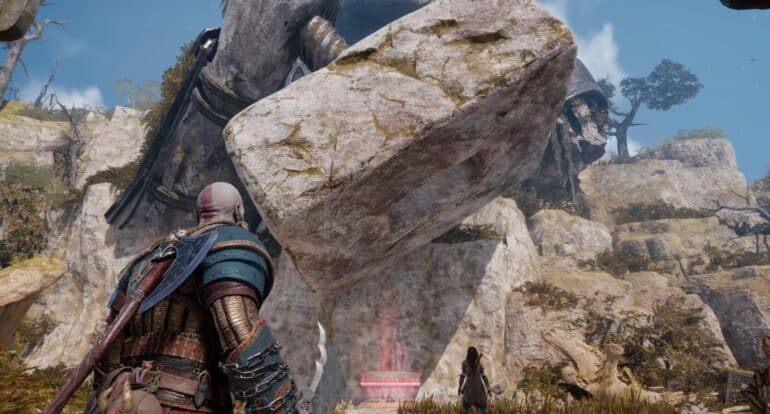 Alberich Hollow Collectibles are scattered throughout the map of God Of War: Ragnarok. These collectibles share certain amounts of substories about the world of Kratos and his son will explore, and provide useful advantages in battle and exploration.

Read on, and this guide will list down exactly how and where to find all the collectibles in Alberich Hollow, including what rewards await them.

Alberich Hollow is a region found in the Svartalfheim Realm of God Of War Ragnarok. There are a total of 7 collectibles found in that region, which are as follows:

Travel to the Dragon Beach region in Svartalfheim and climb on the golden chain on the left side. Then, throw the spear at the wind coming out of the wooden pole and climb up as a ghost will talk to you for a favor. Accept it and the side quest will begin called The Lost Treasure.

After accepting the favor, go to the big wooden bridge and continue to the left end as there are waves of enemies will appear. Defeat them and players will be able to complete the Remnants of Asgard.

Continue going down the left path after the Remnants of Asgard event. There is a chest stuck in some golden ore which can be removed using the burning vase as an explosive.

After collecting the Legendary chest, use the explosive vase again to clear the golden ores blocking the main path. Now move a little bit ahead and look up to your left, you’ll find Odin’s Raven perched on a rock under a tree.

After obtaining the raven, continue ahead until you reach the miniboss “Ormstunga.” Once dealt, explore the area to your left before lifting the stone pillar and you’ll eventually spot the Yggdrasil Rift. Climb over a ledge and interact with the rift, this will contain a Lyndwyrm for “The Lost Lindwyrms” Favor.

Near the rift is another explosive projectile. Grab one of them and throw it at a golden ore blocking a pathway. Afterwards, head straight the path, and you’ll eventually spot the Legendary chest ahead. Opening it will not only grant players rewards, but will also progress the favor, Lost Treasure.

From where the Legendary Chest#2 is found, head right and at the upper area before sliding down the golden chain, a lore can be picked up near the ledge, next to some boxes.

Watch this video created by FoggyProductions to know All Alberich Hollow Collectibles locations in God Of War Ragnarok: