Lost Ark Coin of Courage – How to Earn and Use

A guide on how to get Coin of Courage in Lost Ark. 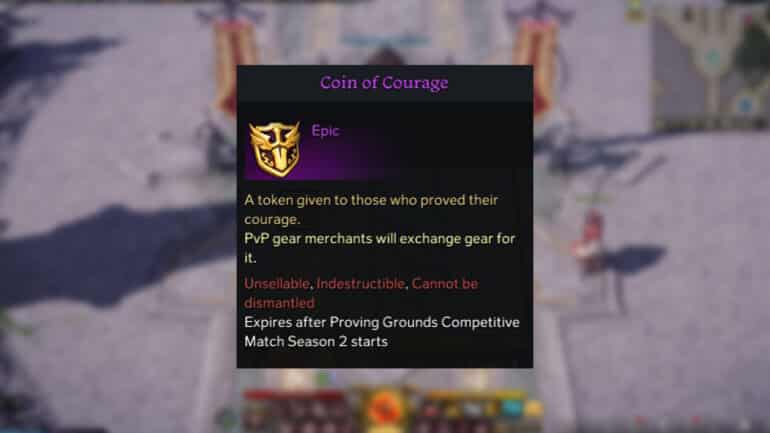 Lost Ark Coins of Courage are an in-game currency that players acquire by participating in PvP matches and may use to purchase rare and exclusive products. These coins can be obtained by winning PvP matches in the Proving Grounds. Players can then exchange these coins to the PvP Exchange Merchant in the city for several kinds of items, including upgrade materials, mounts, and even titles.

Coin of Courage can already be obtained by the players, but as of this article’s writing, the PvP Exchange NPCs have yet to be implemented in the NA servers. We will be updating the details below as more content gets released soon.

What are Coins of Courage in Lost Ark?

Coins of Courage are one of the currencies that players may earn in Lost Ark. There are a lot of currencies in Lost Ark, you have Silver, Gold, Crystals, Pirate Coins, and, most recently, Coins of Courage. It is the primary currency that can be obtained through participating in PvP game modes such as Deathmatch, Team Deathmatch, and Team Elimination.

In order to get these Coins of Courage, players must win PvP matches and attain a high rank in PvP. Weekly Coins of Courage will be awarded to players based on their PvP rating. You’ll get extra coins for participating in PvP if your rank rises.

Now, players shouldn’t believe they can walk into the arena with a max-level character and ensure a win and some Coins of Courage. Every player in PvP matches in Lost Ark is given a unique character to play around with and make their own. PvP fights and Coins of Courage can only be won by sheer skill and a little bit of luck.

How to Get Coin of Courage in Lost Ark

You can get Coins of Courage by winning a PvP match within the Proving Grounds Entry Board. You can also get a one-time reward of coins by completing the Aspiring Brawler quest just by participating in a Team Deathmatch, regardless if you win or lose.

To begin earning Coins of Courage, players must be at least level 26 and have completed the main story quest Rebuilding Luterra in order to proceed. The Proving Grounds, Lost Ark’s PvP arena, is introduced in this quest. Players can join from any in-game Bulletin Board or minimap to take on other Lost Ark players and begin collecting Coins of Courage once the game has concluded.

Coins of Courage are given out to players that win PvP matches. Coins are awarded regardless of the match type, whether it’s a Deathmatch, a Team Deathmatch, or a Team Elimination. As mentioned, the PvP rating ladder is a great way for gamers to earn additional money. With each rung on their ladder, the more money they’ll make. Prior to being able to participate in the ranking bouts, players must first play some unranked matches.

Coins of Courage are awarded only to PvP players with an item level of 302 or higher. They’ll get Tenacious Coins if they don’t.

Another source of Coins of Courage is from the PvP Level weekly rewards within a season. The higher your PvP level is, the more coins you get on a weekly basis. This is different from the end of season rewards where the quality of your rewards is based on your rank once the season ends.

How to check how much Coin of Courage you have in Lost Ark?

You can view how much Coin of Courage you have already obtained by going to the Currency Inventory, then checking under the Token Items tab, and lastly under the Collectible category.

How to use Coins of Courage in Lost Ark?

Coin of Courage in Lost Ark can be spent and redeemed to acquire various items in the game. The items you can purchase at the PvP store using Coins of Courage are the following:

Where to Find PvP Exchange NPC for Coin of Courage

In the same way that other currencies in Lost Ark have their own devoted merchants, Coins of Courage have their own dedicated Quartermasters. You can find the PvP Exchange NPCs near the Proving Grounds entry board in each major city.

From them, you can then exchange your Coins of Courage for rewards or other items. As mentioned, these NPCs have yet to be implemented in the NA servers, so hold on to your coins for now.

For PvP players, the Quartermaster’s store offers a wide selection of both PvE and PvP equipment. PvE players will want to obtain these coins in order to fast rise through the ranks and advance in PvE.

These Coin of Courage NPCs, on the other hand, have nothing for sale at the moment. There is a widespread belief among players that Quartermasters will not sell anything until the PvP season begins later this month.

The Quartermasters, if this hypothesis is correct, will most likely offer a wide range of unique rewards, such as player titles, mounts, and equipment upgrades. Players will only have a limited amount of time to buy these items if they are linked to Lost Ark’s PvP Season 1, which means they will be traded out for Season 2 items.

If you’re a PvP-focused player, you’re encouraged to fight as many duels you can to build up your Coins of Courage stockpile. Because we have no idea what the exchange items will be, players should start saving their PvP coins for now.

Check out this video by Neeko2lo about the PvP Rewards available: