A guide on how the Engraving System works in Lost Ark. 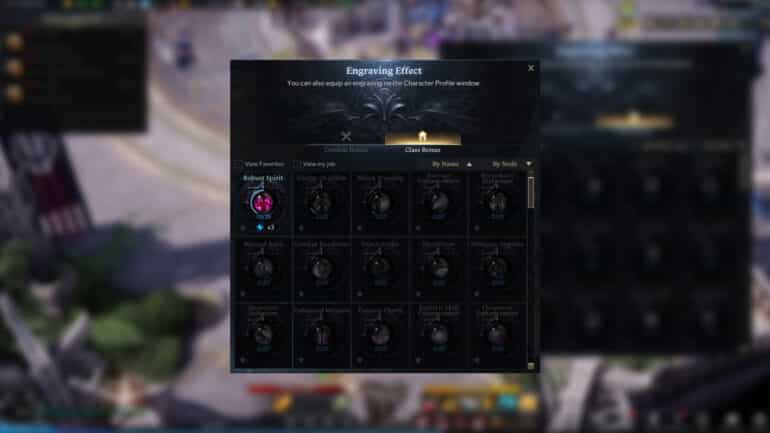 Engravings in Lost Ark are another upgrade system available in the game that lets players further enhance specific stats of their character to fit their playstyle. There are different kinds of engravings, with plenty more to choose from each category. Investing in these engravings becomes vital once players hit endgame to be able to keep up with the challenges ahead.

In this guide, we will look into the engraving system and learn how to make the most out of it for your character.

What are Engravings in Lost Ark?

Engravings give different kinds of effects that help boost certain aspects of your character in Lost Ark. Most of them give buffs and bonuses right away or when certain conditions are met, while some offer other utilities. These engravings can be improved further to gain a higher effect and they are also split into combat bonuses and class bonuses.

Combat Bonuses provide different kinds of bonuses and are roster-wide, which means that all your characters within your server’s roster will be able to use the same engravings that have been unlocked or improved on. There are currently 43 combat bonus engravings in total:

Class Bonuses Engravings are class specific and currently there are two available bonuses per advanced class. Though these are exclusive to each class, characters that have the same class within the same roster can still share the engravings.

How to Use Engravings in Lost Ark

You can use engravings in Lost Ark by meeting the Power Node requirement to activate it. Power Nodes can be found on certain accessories, ability stones, and on the respective engraving effect bonuses that you have learned.

Each engraving has three tiers that require at least five nodes to activate per tier. Equipping the accessories, ability stones, and effect bonuses that have power nodes under the same engraving effect will help you unlock the higher tiers of that effect.

Once you have reached item level 302, you can wear accessories that include effect bonuses. These accessories can be obtained as rewards from doing Chaos Dungeons or Guardian Raids, or they can also be exchanged with shards that you get from these dungeons.

Ability Stones are another source of engraving effects. These stones have to undergo a mechanic called faceting in which the stone’s inherent effects can be amplified.

These stones can also be obtained from Chaos Dungeons, Guardian Raids, or Abyssal Dungeons. Though these stones cannot be equipped while it is still unfaceted, you can already see what kinds of effects the stone has. Similar to accessories, ability stones also have negative effects.

Faceting ability stones in Lost Ark can be considered as a mini-game where you do “cuts” on the stone to amplify the effect. You can go to an Ability Stone Cutter NPC in any major city to do so. Every cut is not a guaranteed success; the maximum success rate per attempt is 75%.

There are only limited attempt slots per stone, which increase as its quality goes up. Once all the slots have been used, including the negative slots, the stone will be considered as fully faceted and can then be equipped. All the successful nodes will then add up to your engraving effects once the stone is equipped.

The basic strategy for faceting is to make the cut towards the effect that you want while the success rate is high, and then make the cut on the negative effect once the rate is low. Here’s a general guide:

You can opt to follow that guide or follow your own guts when faceting – it is a game of chance, after all.

You can also learn Engraving Effects from books, or “recipes”, as how it’s known in the game. You can get these recipes from engraving pouches (combat bonuses) or from engraving chests (class bonuses). On the other hand, these pouches and chests are usually given as quest rewards form main and side quests, as well as from doing the dungeons.

Each Engraving Effect requires you to read 20 copies per tier, starting from Uncommon to Legendary. Each completed tier will give you more nodes for the effect:

You have two slots that you can use to equip a learned Engraving Effect (at least Uncommon), in which you can either place two different kinds of effects, or equip the same effect on both slots at the same time, effectively doubling the amount of nodes that you get for a specific effect.

Check out this video by DrybearGamers on how the Engraving System works: