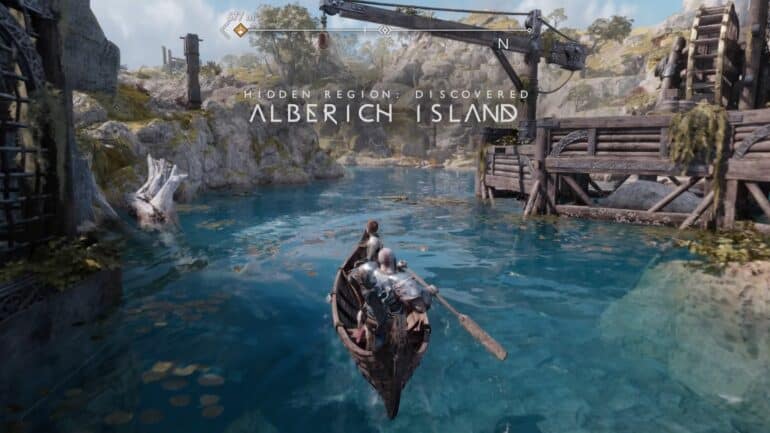 Alberich Island Collectibles are scattered throughout the map of God Of War: Ragnarok. These collectibles share certain amounts of substories about the world of Kratos and his son will explore, and provide useful advantages in battle and exploration.

Read on, and this guide will list down exactly how and where to find all the collectibles in Alberich Island, including what rewards await them.

Alberich Island is a region found in the Svartalfheim of God Of War Ragnarok. There are a total of 8 collectibles found in this region, which are as follows:

Take a boat to head to the beach of Alberich Island in the north of the big lake where a Nornir chest can be found. To open it, use Kratos’s axe to destroy 3 seals.

The first seal is found in the back left corner of the beach, and the second is found on the front left side of the beach where they can use their green arrows on the crane to reveal the 2nd seal. The last real is behind the chest and once all the seals have been lifted, open the Nornir Chest.

In the middle of the beach next to the Nornir chest, there is a gravestone marker that can be interacted with. Once it has been touched, waves of enemies will appear, and a mini-boss known as Beigdar The Feared will fight Kratos. Defeat him and the collectible will be earned.

At the right side of the gravestone, throw a spear to climb up a wall. Climb it and turn left as a spirit will be there offering a favor. Accept it and the side quest will begin.

After accepting the request from the ghost, head to the end of the path and there is a broken bridge to the left. There will be some green sound stones that can be smashed using Sonic (green) arrows. Behind it is a flying Raven that can be shot down using Kratos’s axe or spear.

After getting the raven, turn right and go straight to the end of the path where players can raise the grappling point by throwing the spear. Jump across the platform in the water and a rift will be found. Interact with it and it will be completed.

From the rift, use the grappling hook at the end of the platform. After landing, turn left to find the map on the ground.

After getting the Treasure Map, look through a gap in the rocks at the right and spot a Raven through a hole in the rock.

Then, go back to the chains and pull them once more. Shoot the cog using the purple arrow and then freeze it once more. Hop again on the platform and freeze the geyser. Afterward, grapple to the elevator by the water wheel and unfreeze the geyser to raise the elevator. Climb to the very top and the chest will be there. This will not grant rewards for Kratos but will complete the Lost Treasure quest for this part of the area.

Watch this video by WoW Quests to know All Alberich Island Collectibles locations in God Of War Ragnarok: