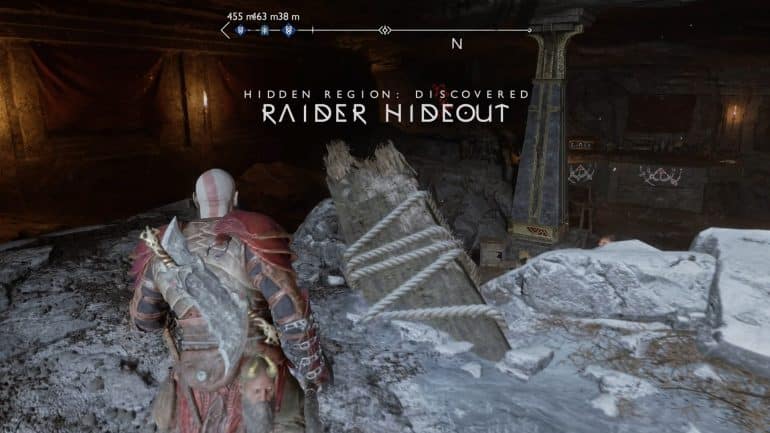 God of War Ragnarok’s Raider Hideout is a large cave situated under a valley in the realm of Midgard. This specific region contains one of the four Kol Raider Camps that you need to eliminate as part of the Animal Instincts Favor/side quest.

Read on, and this guide will teach you exactly how and where to find all the collectibles in Raider Hideout, listing along all the rewards you can get along the way.

There are a total of 3 collectibles found in this region, which are as follows:

To reach the Raider’s Hideout, head east from Raider Stronghold and go down the road that ends at huge wall. When you get to the end, there will be a cave entrance on your left.

Before going in, pick up the buried treasure on your right, lying on the ground near the cave entrance. This will complete the Treasure Map (Viking’s Gift) that you can obtain from Raider Fort.

As you enter the region, you’ll be faced with a bunch of Kol Raiders and Kol Raider Scouts, which you eventually need to defeat and count the collectible as complete.

Once dealt, this will update the objective for the Animal Instincts Favor. There are 4 Kol Raider Camp Locations in total, and the quest will automatically start (if you haven’t gone into one yet) once you clear out one of these camps.

After clearing out all of the enemies, climb a ledge and head over to the right corner of the cave and find the chest next to some wooden boxes.

This Legendary Chest contains the Tartarus Rage, a heavy runic attack for your Blades of Chaos.

This can be found on the left side of the cave. However, just like every Nornir chest in the game, you’ll need to find and unlock 3 Runic Seals to open it.

The Seals on this particular Nornir Chest are in the form of Braziers, and you’ll be needing fire bombs from the vase in the center to ignite it. As such, here’s where you can find all 3 braziers:

The 1st Brazier can be found behind the red vines, to the left of the Nornir Chest.

Shoot a Sigil/Purple arrow and ignite the vines with your Blades of Chaos to reveal the Runic Seal, then pick up a fire bomb and throw it at the Brazier.

The 2nd Brazier can be found behind the golden ores in the wall, to the right of the Nornir Chest.

The 3rd Brazier can be found on the right side of the cave (east) near the entrance.

The brazier is located atop a stone pillar, which is too far to reach with your Blades of Chaos. Create a chain of Hex sigils, starting at the Brazier and ending at the base of the pillar.

Now throw the fire bomb pointing at the Brazier so that it falls toward the bottom sigil and sets off the chain reaction. See the image above for reference.

Also watch this video by Gamer Guru on how to find All Raider Hideout Collectibles in God of War Ragnarok: