How to Beat Gna in God of War Ragnarok: Boss Fight Guide 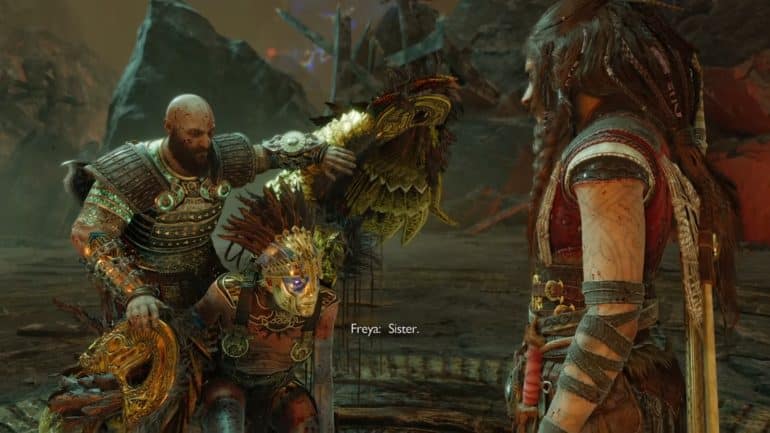 Asgard has fallen but that doesn’t mean that the Einherjar are defeated. In the Defend Your Valor favor of God of War Ragnarok, you must defeat Gna, Queen of Valkyries, and finally close the book on Odin’s reign once and for all.

In this guide, we’ll tell everything you need to know in order to beat the Valkyrie Queen Gna aka Odin’s top enforcer. She’s the toughest boss in the game, and lives up to the reputation.

Where to Find Gna in God of War Ragnarok?

Since the battle of Asgard, Gna has been in hiding and reforming what’s left of Asgard’s armies to wage some kind of guerilla war in the worlds where pieces of Asgard have fallen. To flush her out of hiding, you’ll first need to clear the Last Remnants of Asgard Favor.

Once you’ve completed it, the path to her camp will be unlocked. To get to it, you’ll need to the Crucible in Muspelheim. Once you’re there, look for a crawl space right of the main arena. Look over the edge for a crack to hang on to and traverse the pit to her camp on the other side. To initiate the fight, interact with Gna’s journal and she’ll have no choice but to confront you.

How to Defeat Gna in God of War Ragnarok?

Fighting Gna is no laughing matter. Even with all the best gear at the highest level, she’s still more of a challenge. She easily outclasses Sigrun from the last game in ways I didn’t think was possible. But then again, hate and rage do wonders to one’s fighting spirit. (Just ask Kratos about that.)

For this encounter, I was wearing the following gear:

This set allows for very high defense and high Vitality while being able to rely on relic abilities. This is just a suggestion, of course. Feel free to mix and match things according to your playstyle. Just know that you will need to be flawless in your parries and dodges if you want to get anywhere in this encounter. And in higher difficulties, this boss’ health will be even greater.

As for Amulet mods, I was running with the following sets:

Gna has a plethora of attack combinations that she chains together in quick succession. Anticipation and quick reaction time are what’s going to keep you in the fight but constant pressure and unrelenting strike is what’s going to win you this fight.

You may need to accept that you will die a lot in the learning process.

As illustrated in the image above, Gna has blue unstoppable attack that covers a wide area. The only way to deal with it is with a shield bash. What’s note worthy is that she can use this attack within seconds of the last attempt. If you are using a Runic Attack with a long animation, you’re going to get hit by this attack no matter what.

Now that is far from her only unstoppable attack. Gna makes use of diving slash attacks, a bifrost wave attack, and an unstoppable drop kick attack. The kick attack is something you should be very wary off, it takes little to no time to connect and it discourages aggressive play. Dodge rolling is the only thing you can do here but if you have a burst in your pocket, don’t hesitate to use it.

Something the Valkyries didn’t have in the last game is this new large shuriken weapon. First seen in your fight with the 2 other Valkyries under Odin’s command, this weapon does a lot of damage in a short of amount of time.

Gna also has a couple of unstoppable attacks where she either throws the shuriken forward or they orbit around her for a set period of time. The orbiting daggers are especially dangerous because you can be in mid-combo and one of them can sneak up behind your camera.

The Valkyrie queen can choose to cut and stab with these blades as well in a series of relentless strikes. You can try to parry the initial hit but once that first blade sinks in, you’re screwed. Your best bet is to hold your ground with the shield until she switches attacks.

The images above are mostly the old moves Valkyries from the last God of War game had. These should be a familiar sight to players who have played it and have beaten the corrupted Valkyries. But for everyone else, here’s a quick run through.

The images above show two attacks that can only be countered using a hex arrow or sonic arrow. The timing for these attacks are strict and dodging them isn’t always guaranteed.

To counter them, you’ll quickly need to recognize which glow they have and tell Freya to shoot the right type the moment you see the glow. Don’t bother with aiming the arrow. Just look in the general direction, press up to bring up right arrow as needed, and Freya will automatically shoot the right spot every time.

Mastering this timing is what broke the fight wide open for me and gave me a chance to win this fight. I can’t tell you how many live I’ve wasted trying to manually the arrow with the controller.

One of the last pieces of advice I can off is that you do not lose track of her for even a second. It could prove to be fatal most of the time. This is especially true when she does her rapid drop attacks and if she lands behind you, there’ no telling what her next attack will be until it’s too late.

Gna is deserving of the title of ‘Final Boss’. And she should be given as much respect. If you’re planning to take her on in the hardest difficulty, you’d better bring your A-game.

If you manage to bring the Valkyrie Queen down, you’ll be rewarded with a bunch of new stuff for Freya (Not much sure what use they’ll be in post Epilogue but maybe it’ll see much more use in New Game Plus). For us players, we get The True Queen gold trophy. If you can get this trophy, you are well on your way to getting platinum in God of War Ragnarok.

And that’s it for this Valkyrie Queen Gna boss guide. We hope this article was informative. For more on God of War Ragnarok content, we have more articles for you to check out.

Also watch this video by GuidingLight showing us Tips & Tricks on how to defeat Gna in God of War Ragnarok: