How to Beat Gryla in God of War Ragnarok: Boss Fight Guide 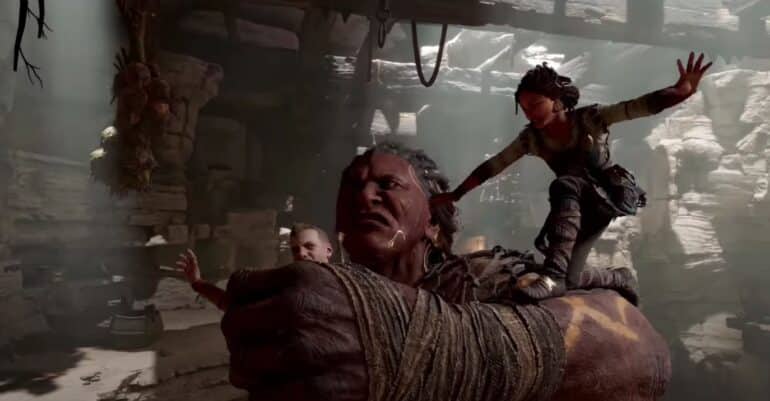 How to Defeat Gryla in God of War Ragnarok?

The only way to beat Gryla in God of War Ragnarok is by hitting the purple rune on the cauldron she is carrying with Atreus’ arrows. You have to constantly keep moving as Gryla has many area of effect attacks which forces Atreus to be light on his feet.

This is the first boss you’ll fight as Atreus. There’s a large area around the kitchen you can maneuver around in which gives you a better view of the purple rune you need to damage Gryla. While the top counters are easy to maneuver around, you will need to get off the elevated areas once they turn red because they will become poisonous. The same goes for the floor when they also turn red. This makes it a boss fight where you’ll have to keep moving to different areas to avoid damage.

Angrboda will offer to stun Gryla for you, making it easier to hit the rune on the cauldron. Press square on the candles with purple flames when Gryla is near them which will leave her open. Use this moment to deal as much damage to Gryla as possible.

After damaging the purple rune on her cauldron enough, Gryla will eventually drop to the ground. This puts the cauldron stationary which also leaves her vulnerable to a lot of damage.

One her last bar of health, Gryla will fall to the ground one last time. You’ll have to go near the cauldron where you’ll get the R3 prompt which after mashing the circle button ends the boss fight.

Check out this Youtube video from Boss Fight Database showing a fight with Gryla in God of War Ragnarok.