A guide about the Conviction Skill Rune in Lost Ark. 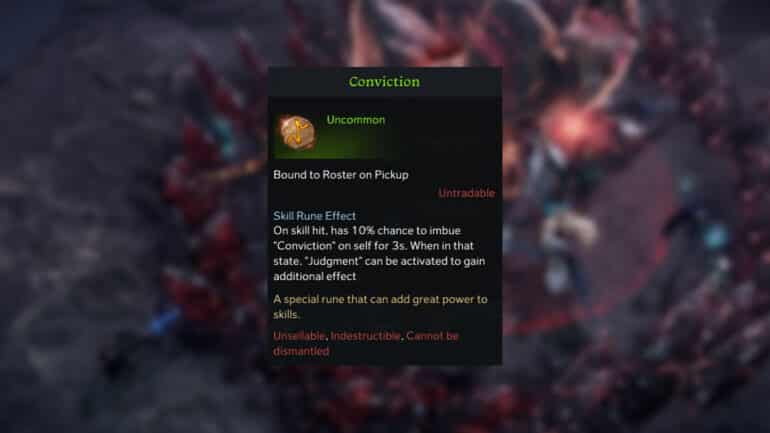 Conviction is one of the Skill Runes in Lost Ark that players can equip on their skills to gain a special effect. It is a skill rune that has a specific synergy, and if done right, it can significantly increase a player’s skill DPS output.

In this guide, we will look into the function of the Conviction skill rune, how to get it, and how to use it to maximize its synergy.

What is the Conviction Skill Rune?

The Conviction skill rune can be equipped on a skill that provides the “Conviction” buff for 3 seconds on skill hit. The chance of proccing the Conviction buff depends on the rarity of the equipped rune:

What is the Conviction Buff for?

The Conviction buff is needed in order to proc the Judgment skill rune, which in turn provides the “Judgment” buff. The Judgment buff will increase the Combat Resource Recovery rate (Mana or Stamina) by 100% and reduce skill cooldowns by 15% for 6 seconds.

Similar to the Conviction skill rune, the Judgment skill rune should also be equipped on a skill and its proc rate also depends on the rune’s rarity:

Which skills should the Conviction and Judgment runes be equipped on?

Ideally, you would want to equip the Conviction skill rune on skills that can hit multiple times to have a higher chance of proccing the buff, and/or on skills that have a low cooldown time so that the skill can be used often.

As for the Judgment skill rune, you would want to equip it on a Normal, Point, or a Holding skill that has a low channeling time, and/or one that can hit multiple times. This way, you can immediately use the skill within the 3-second window that you have the Conviction buff on, and so that you have a higher chance of proccing the Judgment buff with the multiple hits.

The skill rotation for this synergy should be as follows:

Furthermore, your synergy management will depend on your class’ skills and runes’ rarity. On low rarities, you may want to have two skills that have Conviction runes equipped to raise the chance of getting the buff.

Where to get Conviction and Judgment Runes in Lost Ark?

Both runes can only be purchased from merchant NPCs, while some can be obtained as Rapport rewards.

How to get Adventurer’s Seals?

Adventurer’s Seals are a kind of currency exclusive to your Stronghold. You can get these seals by sending out Normal dispatch missions from your Stronghold’s dock. You can also exchange your other Raid or Victory seals for Adventurer’s seals through the rotating trade merchant in the Stronghold.

Check out this video by Formula Troy about skill runes: