An overview of Abyss Raids in Lost Ark. 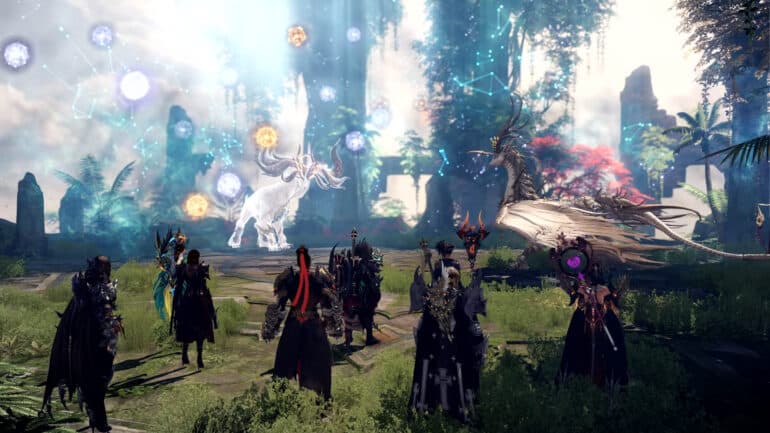 Abyss Raids are the newest additions to Lost Ark‘s gameplay and will sure to provide hardened players a higher challenge to overcome. Being “well-equipped” is an understatement as players who aim to enter into an Abyss Raid will have to have their gear and stats almost maxed out. There is also the added challenge of working and communicating well with another party to avoid an early defeat.

In this guide, we will look into the mechanics of the Argos Abyss Raid and share some tips and strategies to increase your potential to win.

How to Unlock Argos Abyss Raid in Lost Ark?

To unlock the Argos Abyss Raid and fight Argos, you must first finish the “Abyss Raid Unlocked!” guide quest. In major cities, heroes who fit the prerequisites and are willing to take on Argos the Traitor can recruit a companion through the Abyss Raid Statue or join a specific group. Players can also use the “Find Party” button available below the mini-map to find a party and enter the encounter.

What are Abyss Raids in Lost Ark?

An Abyss Raid is different from the existing dungeons and challenges such as the Guardian Raids or the Abyssal Dungeons. There are several aspects from those dungeons that are mixed together and have been amplified to a great extent.

An Abyss Raid is definitely not something that a player can just decide to queue into as it takes a lot of preparation in order to conquer it, from making sure that the character is geared up, to even finding the right party members.

Players will need to work together to destroy Argos before the time runs out, similar to the Guardian Raids players encountered across Arkesia, with a limited number of revives available to the party. In order to take on Argos, a relentless foe, you’ll need eight players.

First off, an Abyss Raid requires 2 sets of 4-man parties to start, with 8 players in total per raid.

It is important that the parties have an established set of members who can communicate well with each other. This is because there are several mechanics that separate the parties in different rooms and that will require a party to communicate incoming attacks that will affect the other party. This makes teaming up with a random highly not recommended as it will make the raid hard to clear.

Connected to that, each party has to be self-sufficient on its own. The party has to have balance between attackers, defenders, and supporters so that when separated from the other party, it can still survive and perform well with its damage output.

Next, an Abyss Raid will have lots of different mechanics. It is basically having a single boss to fight like in a Guardian Raid, mixed with the complex mechanics that you can encounter in a Abyssal Dungeon.

You don’t only have to defeat the boss, but you also have to take note of your surroundings and make sure that you fulfill specific steps to avoid taking massive damage, or worse, getting raid wiped. These challenges can range from standing at certain spots of the arena, destroying certain objects, memorizing patterns, taking or avoiding certain runes, etc.

Each phase of a raid provides the entire raiding party four (4) revives which is shared between the two parties. It is possible that a single member can use up all the revives within a phase, so make sure that you don’t have that one party member who hogs up all the revives.

On the other hand, once a phase is completed, the revive counter will be replenished back to four and all dead party members will be resurrected for the next phase.

An Abyss Raid is similar to an Abyssal Dungeon or a Chaos Dungeon in which there are different phases in a fight. For example with the Abyss Raid Boss, Argos, the raid is split into three phases, with each phase having its own set of mechanics.

Each phase also has a recommended item level or iLvl so that the player can keep up and survive the phase. The iLvl is the gauge of how adequate your current gear is in terms of the challenge provided by the dungeon or raid.

The iLvl can be lower than the recommended, but that puts more pressure towards the other party members to compensate. The ideal iLvl for a character should be at least the recommended iLvl at the final phase of the raid, preferably even a couple of levels higher.

Players will need to progress through three distinct phases as they work together to vanquish this powerful Guardian. In the three phases, Argos will grow more powerful with different mechanics and attack patterns. Each phase has its own table of rewards, collectable once a week, and a different item level requirement for players to participate.

We have created individual guides for each of the phases below:

Additionally, there will also be a Box of Captured Souls that you can open in exchange for some blue crystals that can give you more loot from a set list. The quality of items in this box will depend on the number of phases that has been cleared in the raid.

There’s also a brief loot auction that happens at the end of the raid where players can bid using gold to get a certain item that they want from a prize pool.

We have a guide for the first upcoming Abyss Raid boss, Argos, so that you can learn what to prepare and how to survive his raid.

Check out this video by ATK as a sneak peek of what to expect in the Argos Abyss Raid: